Want to know how to be a (take) action hero? WE GOT YOU BABES.
This episode was SUCH a blast. Join us as we talk to Kate Green, Producer, Director and  fierce champion of female storytelling. Kate is the change that we want to see, with a grace and passion that is second to none. We talk Zombie Westerns, full circle friendships and collaborations, and how running for your dreams can lead you to even bigger ones.

Kate is an unapologetic leader of a ride or die crew. She embodies how to harness and use her unique feminine power to create a squad of epic proportions.

Kate Green is an award-winning director and producer whose rare storytelling ability captures audiences with its honesty. As a female leader in entertainment, Kate works tirelessly to carve a path for other women within the industry. Kate is the creator, director and producer of the Canadian Screen Award nominated “NarcoLeap” a sci-fi web series that first aired on TELUS OptikTV, CBC GEM, and Air Canada and has sold internationally as well. “NarcoLeap” season two was one of the first female lead, indie, BC-based projects to go back to production after COVID and recently released on Highball TV to enthusiastic audiences. It is currently being developed as a television series.

Kate has also worked on numerous programs in lifestyle and factual television as a producer or director. Her work has aired on various networks such as HGTV, W Network, CBC, History, Fuel TV, and Slice. Kate’s is also an award-winning documentary filmmaker, having produced and directed two documentary shorts; Not A Stranger and Melting Stars. Kate’s latest short film, a zombie western titled Murphy’s Law, recently aired on CBC and CBC GEM.

Bombshell Brunches would like to extend special thanks to Morgan at MPR for the introduction, and to Olivia Cheng for the referral!

Thank you to our incredible BB Team: 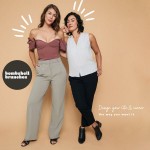